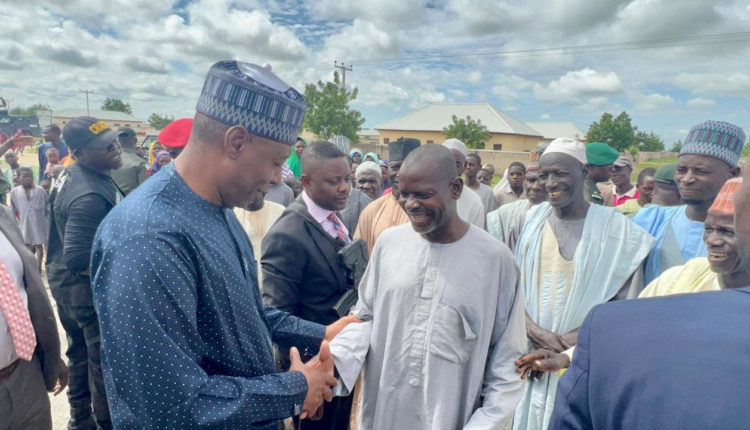 During the separate unscheduled visits, Zulum, a University Professor of irrigation farming, interacted with farmers, asking them of problems they face so he could address them.

With rainy season in place, majority of the farmers were seen weeding and planting across most farmlands when the governor paid them the visits.

Zulum explained to farmers that unlike in other states, Borno State was not able to procure and allocate NPK fertilizer to farmers because there was an existing ban by the federal government through office of the National Security Adviser.

“We have long been in receipt of a security letter from the office of the National Security Adviser which placed ban on the usage of urea as well as NPK across Borno State because insurgents use these fertilizer components to produce improvised explosive devices (IEDs). It will therefore not augur well for the government of Borno State to distribute that fertilizer as the case in most states”, Zulum said.

The governor however explained that the only option is to distribute liquid fertilizer.

Professor Zulum said he was excited with the turnout of farmers he met on ground during his visits and from reports he got, similar and even more farming activities in areas like southern Borno which has been more peaceful over the years.

He said it was for that reason that he directed the allocation of farm inputs and tractors to farmers in parts of Borno’s three senatorial zones: Central, South and North.

He promised to enhance his focus on agriculture especially continued strengthening of agro rangers and other security groups to sustain safe farming activities across Borno State.