Tinubu pays surprise visit to Osinbajo at his residence

Recalls that Mr Tinubu defeated Mr Osinbajo and 12 others at the just concluded presidential primary of the APC.

The visit occurred a few hours after Mr Osinbajo congratulated Mr Tinubu for the victory and pledged to work with him to emerge victorious in the general election.

Laolu Akande, Senior Special Assistant on Media and Publicity to Osinbajo said they got a call that Tinubu would be visiting.

He said Tinubu came in company of the Lagos State Governor, Babajide Sanwo-Olu and that the Vice President received the surprise with some of his associates. 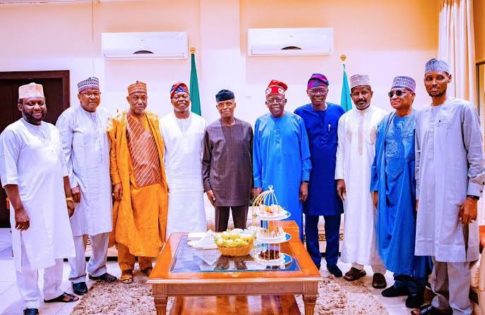 Akande wrote: “We got a call: Asiwaju Tinubu who was visiting President at his Presidential Villa residence this evening will be making an unscheduled stop at VP’s residence also.

“Lagos Gov accompanied him & VP received the surprise with some of his associates whom he was meeting with earlier.

‘’the meeting was one of pleasantries and very convivial. The meeting lasted about 30 minutes.”

He said the former Lagos governor was jovial throughout the visit and shared the story of Mr Osinbajo’s contributions not just to him as a person but to his political sojourn.

“He particularly recalled the efforts of the vice president in securing court victories for the defunct ACN especially with the court case in Osun State,” he said.

He also said Tinubu narrated how Mr Osinbajo went to the UK at a time of extreme weather to get fingerprint technology that was used to help the court cases.

“Asiwaju said he is surprised that people assume the presidential contest will create a wedge between him and the vice president. He told us that they have come a long way and they are like blood brothers now.

“He said what happened was just democracy in action and there was nothing wrong with it.”

ASUU explains why Tuesday’s meeting with FG ended in deadlock