By Marvellous Gbadegesin Last updated May 6, 2022 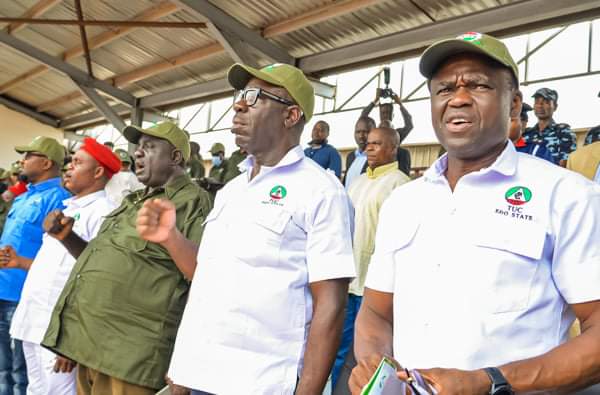 The Edo State governor, Mr. Godwin Obaseki, has approved N40,000 minimum wage for workers in the State, increasing it from the former N30,000, to cushion the hardship being experienced by the workers, particularly the effects of rising food prices.

Gov. Obaseki made the announcement at the Samuel Ogbemudia Stadium in Benin City, the Edo State capital, on Sunday, May 1, 2022, during the May Day celebration.

The announcement which was received with wild jubilation by the workers, was in addition to the commitment made by the governor to complete the Labour House for the workers, harmonise pension for retirees and a legacy of digital governance (Edo-Gov) for the public and civil service before he leaves office.

The governor said: “As a government we will continue to prioritize the welfare of workers in the State and sustain every effort to ensure a worker-friendly environment for the workers to be able to perform optimally.

“For the Edo worker to be effective, we have decided to review upwardly the N30,000 minimum wage of workers so that they can meet their basic needs.”

He explained that his administration was not unaware of the hardship being experienced by workers, and said that the current minimum wage of N30,000 could barely sustain the Nigerian workers given the harsh economic realities in the country.

“Accordingly, the Government of Edo State has decided to review the minimum wage of Edo workers to N40, 000 a month,” he declared.

While acknowledging the cost implication of the upward wage review, Obaseki assured “we are prepared to make the sacrifices for Edo workers to have a better life.”

The Governor further said that the John Odigie-Oyegun Public Service Academy was built to provide world-class training for public officers as his administration is resolute about moving work to a transparent and digital era from the age-old opaque, transactional and analogue system of doing government business.

He urged workers to engage in agriculture to mitigate the impact of the harsh economy and gave insight into the ongoing revamp of the Agriculture, the College of Agriculture in Iguoriakhi, the expansion work at the Stella Obasanjo Hospital as well as the gains of the health insurance scheme initiated by his government, which have begun to kick in; and reducing out-of-pocket spend on healthcare by the citizens.

Earlier, the Acting Chairman of the Nigeria Labour Congress (NLC) Edo State Council, Comrade Odion Olaye, and the Chairman of the Trade Union Congress (TUC) Comrade Marshall Ohue, took turns to commend the governor for the ongoing construction of the Labour House, the absorption ofsacked staff of the State Universal Basic Education Board (SUBEB), the absorption of former Bendel Brewery staff, promotion of workers, prompt payment of salaries and pension, amongst other achievements.

Prev Next
21 Comments
Leave A Reply