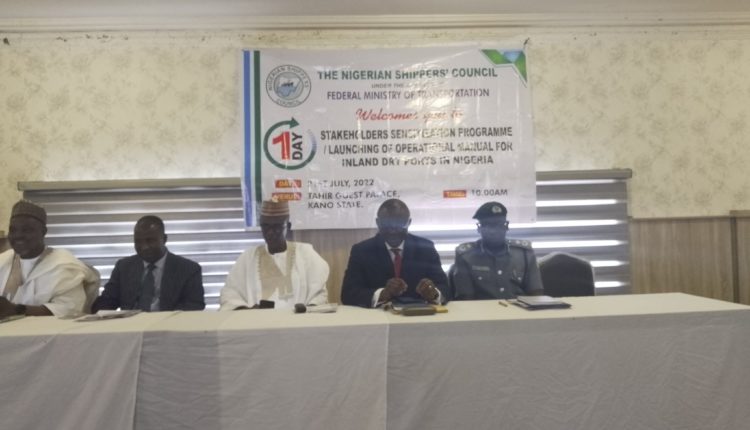 The Nigerian Shippers’ Council (NSC), on Thursday in Kano, unveiled operational manual for Inland Dry Ports to enhance efficiency at the ports across the country.

The Executive Secretary of the Council, Mr Emmanuel Jime, who spoke at the official launching of the manual, said it would address operational gaps, boost transparency and accountability in the sector.

He said the operational manual which would be launched in Kano, Porthacourt and Lagos respectively would provide detailed processes and procedures for the main activities of the Inland Dry Ports.

“The strategic importance of producing the manual which articulates the step-by-step procedures for receiving, storing, handling and delivery of cargoes as well as highlighting the operations, the responsibilities of agencies and timeline for discharging such tasks was sine-quanon,” he said.

Represented by Director Inland Transport Service, Philip Eduwa, Jime said the operators and the regulators are compelled to abide with the operational processes as contained in the manual.

According to Jime, the manual will be used as a measure of performance by the regulator and will be subjected to future review.

He said the Ports projects were conceived as part of Federal Government’s reform programmes in the transport sector to promote efficient transportation and to engender trade facilitation.

Jime said the Federal Executive Council granted approval for the establishment of Inland Dry Ports in March, 2006 at six locations across the country.

He listed the ports to include Isiala-Ngwa in Abia; Erunmu in Oyo, Heipang in Plateau, Funtua in Katsina State, Maiduguri in Borno, and Dala Dry Port in Kano State, which would soon be commissioned.

The executive secretary restates the commitment of the agency and Federal  Ministry of Transport in providing the enabling environment for dry port projects nationwide to operate optimally.

Earlier, the representative of Minister of Transport, Ewoche Victor, a Deputy Director in the ministry, said the projects were developed through Public Private Partnership using the build, own, operate and transfer (BOOT) model.

He said the manual was based on best international practices adapted to local context, but not fully customised for each dry port and each port would have its own specialties.

The minister noted that effective operations of a dry port requires seamless coordination between the seaport and other key stakeholders involved in port operations.

He described the launching of the manual as a milestone to fast track development and operations of IDP projects in the country.(NAN)

INEC to publish particulars of all governorship, state assembly candidates for 2023 elections Friday