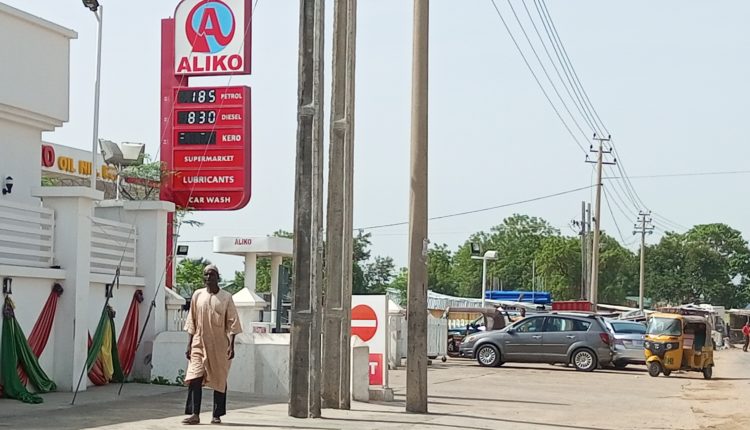 Fuel marketers increased the pump price of petrol in Kano on Wednesday with several stations selling the product above the government-regulated price of N165 per litre.

Although the Group Managing Director, Nigeria National Petroleum Company (NNPC) Ltd, Mele Kyari last week promised that the recent fuel scarcity would be a thing of the past over the weekend with the meeting they had with stakeholders in the industry and the price remain N165 per litre.

A Solacebase correspondent who visited petrol stations on Wednesday, in Kano found that some filling stations on Airport road, Paniso and Bompai road areas of the city had started selling to motorists at prices as high as N 220.

At A.A Rano filling station, on Bompai road by Central Hotel roundabout and Aliko petrol station, at Paniso by Jaba the product was sold for N185 per litre.

An attendant at A. A. Rano who did not give his name told Solacebase that the price was increased yesterday, Tuesday.

Also, at Amkar petrol station on Airport road, the product sells for N220 per litre.

An attendant at the filling station told Solacebase that they only increased the price to N220 last week as they dispense for N215 for over three weeks.

A motorist at Amkar petrol station on Airport road, Ibrahim Baba expressed sadness over the hike in fuel price despite government insisting that the price remains N165 per litre.

‘’Its so sad that I can only afford fifteen litres at this price of N220 and surprisingly, the NNPC keep saying we should not do panic buying noting that the price remains N165 per litre.

Another motorist at Aliko petrol station on Jaba/Paniso road, Aisha Yahaya told Solacebase that even last week when she bought fuel at the station , it sold for N185 per litre.

‘’ Is like we don’t have a government in place again as the petrol stations dispense fuel at the prices that suit them without any sanction,’’ she lamented.

However, the situation is different with major petroleum marketers in Kano as they still dispense petrol for N165 per litre.

A check by Solacebase at Oando filling station by Club road , Murtala Muhammad way round about sells for N165 and same goes with Ardova Plc (formerly Forte Oil PLC), on the same road that dispense for N165 per litre.

More than 90 percent of petrol filling stations in Kano and most part of the northern States are owned by Independent Petroleum Marketers Association of Nigeria, (IPMAN).

When Solacebase contacted Kano State Public Complaints and Anti-Corruption Commission Chairman, Barr. Mahmoud Balarabe said the commission has being receiving such complaints from residents and would take action immediately.

‘’Initially, the agency saddled with the regulatory of the petroleum pricing, Nigerian Midstream and Downstream Petroleum Regulatory Authority (NMDPRA), ( formerly DPR), told me that they have constituted a committee to check such excesses, but with the present situation, we would have to take action as nothing seems to be done, ‘’Barr. Mahmoud told Solacebase on Wednesday.

Kano IPMAN Chairman, Alhaji Bashir Danmalam expressed surprise over the price hike by his members, adding that he would find out and get back to this newspaper.