The multi billion naira Ado Bayero bridge on Zaria road, Kano, has developed another fault, raising fears of traffic disruption in the area.

Solacebase recalls that the Federal government- owned bridge was constructed by Road construction company and commissioned in 2014.

The bridge, which links Kano with Zaria and Maiduguri roads, had earlier developed a crack which was fixed some years back.

The Supervising Engineer of the company that constructed the bridge, Mr Jibrin Sa’idu, described the fault as “Punch” which occurred on one of the lanes of the dual carriage bridge.

Sa’idu, who spoke in company of Mr Abdulsalam Dayyabu-Kurfi, representing the Federal Controller of Works in Kano, Mr Yahaya Baba-Ali, said the company would move equipment to fix the fault.

He gave an  assurance that the company would find a lasting solution to the problem.

Sa’idu wondered why the fault which exposed some layers of the bridge including the rods, should occur again, after it was rectified eight years ago. 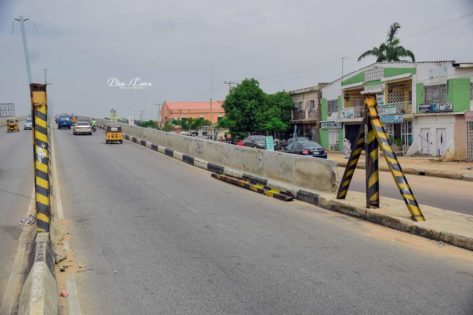 He explained that the Punch was not an engineering defect but a fault that occurred due to prolonged tear and wear on the bridge.

In his reaction, the Federal Controller of Works in Kano state, Alhaji Yahaya Baba-Ali attributed the damage portions of the bridge to heavy trucks plying the bridge.

The Controller said security agents would be stationed at the bridge to disallow heavy trucks from plying it, to avert further damage.

He gave an assurance that the rehabilitation work on the bridge would commence as soon as possible.  (NAN)