The Institute of Chartered Accountants of Nigeria (ICAN) Kano & District Society has inaugurated new executives that would pilot its affair for next one year.

In a remark at the occasion, ICAN President, Mallam Tijani Isa Musa represented by Nasiru Muhammad urged the newly inaugurated Chairman to be a team player and always strive to carry members along in decision taking so as to achieve set goals.

He then advised the chairman and other executives to continue the good work done by their predecessors.

On his part, chairman investiture committee and former chairman of Kano district,  Dr. Abubakar Umar Farouk gave an overview and brief history of the Institute. 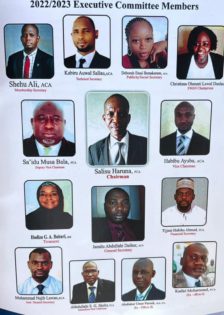 Dr. Abubakar charged them to take the mantle of leadership and discharge their duties with commitment and vigour.

” This investiture ceremony signifies the reliance, commitment, confidence, competence and trust that the Institute consigns in the newly elected executives in taking the Institute to greater heights” he said.

In his acceptance speech, the newly inaugurated chairman of the district, Salisu Haruna promised to uphold the dignity , the tradition of the Institute and also to keep the flag of the Institute high and continue to build on the good work of his predecessors.

” There is foundation that previous chairman started building, I will try my best possible to continue from where he stopped, and I will also keep organizing training and workshops for our members to become experts in the accountancy profession.”