The town usually attracts people from all spheres of life for buying and selling of fish, hence boosting its social-economic activities.

Unfortunately, the boat disaster in the community downturned their fortune.

Solacebase had reported that 29 people including Islamiyya school pupils were confirmed dead in November, 2021 boat mishap in Bagwai River, Bagwai Local Government Area of the state.

The boat had about 50 passengers aboard including the Islamic school children going for an event.

A boat owner, Abdulhamidu Musa Dan-Kifi , said he lost six boats that he usually hire out for fishing during the rescue operations.

In a chat with Solacebase, Dan-Kifi laments that he had been living from hand to mouth after the incident before he eventually repaired four out of his six damaged boats to fend for his family.

“When the disaster happened, we used our boats to rescue the victims and recover the corpses. And most of the boats were damaged. Six of my boats got damaged and I couldn’t cope.

‘’Nobody assisted me, I complained and they said the State Government will assist us. I had to repair the boats to put food on the table”, he lamented.

Also, a veteran fisherman, Yunusa Aliyu said he made at least N10,000 daily from the fishing business before the incident is presently living in squalor.

“Before the tragedy, this place used to be a market and many people come to buy fish from us. I usually make N8,000 to N10,000 daily. But right now our business has been crippled because we no longer have boats for fishing”.

Some elders in the community expressed disappointment over the failure of the state government to fulfil its promise on the replacement of the fishermen boats, provision of 3 modern boats with financial support”.

“18 fishing boats got damaged during the incident, and right now the owners of the boats are out of business. To add salt to injury, the Government is yet to fulfil its promises to them, ‘’Yusuf Yahaya, a community leader said dejectedly.

Similarly, a traditional ruler, Mallam Umaru Bagwai, said the state government has failed to assist the fishermen as promised.

Mallam Bagwai said the search and rescue efforts after the boat mishap was carried out with the boats of the fishermen who are mostly peasants.

‘’ After the exercise when the governor was around, he promised them money, replacement of their boats and others but nothing has been done till this moment for them.

He however called on the State government to fulfil its promise by providing boats to the community.

“I spoke with the Governor and he promised that modern boats will be given to the community, but nothing has been done, this is 7 months after the incident. Those that gave out their boats to us during the search and rescue exercise are complaining that they are yet to get their boats repaired due to lack of fund. I am calling on the State Government to address the plight of the people”.

While the villagers are almost having a dashed hope, the federal government through the National Inland Waterways Authority rekindled their hope with a donation of an 18-passenger capacity ferry boat on the 2nd of April, 2022.

Though the capacity of the boat could barely serve the villagers of about 200,000 populations, they believe in the doctrine of half a loaf is better than none.

When Solacebase Correspondent boarded the boat , he observed that all passengers traveling by the donated boat from Bagwai to Badau community wear life jackets as a safety measure in case of mishap.

Besides, the boat Captain, Abdullahi Sani says only 18 persons are allowed on the boat to avert the recurrence of the last disaster allegedly caused by overloading. 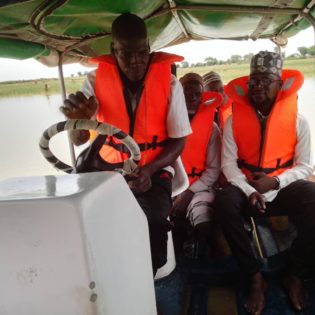 “The agency said the boat should carry only 18 people, including myself. So that is what we are doing now. And we have been instructed that nobody should board the boat without a life jacket”.

However, reacting to the claims of the Bagwai residents, the State Commissioner for Information, Muhammad Garba said a Committee led by the Naval Commander in Kano is handling the provision of modern boats promised by the State Government.

“The issue of the modern boats is being handled by a Committee headed by the Naval Commander who is based in Kano. They have discussed the issue extensively with good recommendations. So I am sure whatever the issue is, it is not beyond the State Government. Its just that the committee is yet to submit its final report.

”We saw how the Governor and the Emir of Bichi presented cash donations and food items worth millions of naira to the families of the victims of the boat mishap. Even those engaged during the rescue exercise, I am sure the government has assisted them,” the commissioner said.

On the fishermen’s plight, Garba said the government had fulfilled its promise, tasking them to find out the details from their local government council.