The press crew bus which was in the convoy of All Progressives Congress, APC, presidential candidate, Asiwaju Bola Ahmed Tinubu, was attacked by the thugs who threw heavy stones repeatedly at the vehicles conveying dignitaries, including Governor Babajide Sanwo-Olu; Kano State Governor Abdullahi Ganduje; and others, who had just left the palace of Oba of Lagos, Oba Rilwanu Akiolu.

The press crew bus was heavily attacked by the hoodlums, as it drove with high speed to escape while journalists had to lie low in the bus for many to escape being injured, but still few others were not lucky enough as they escaped with brushes. 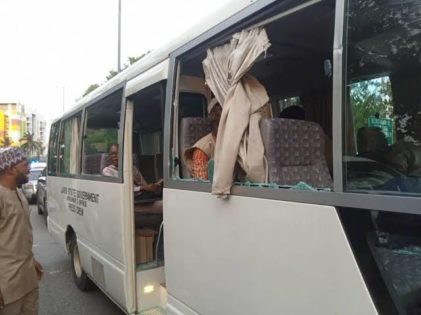 However, Western Post correspondent, Ms. Adeola Ogunrinde and Omatseye Atsenuwa of Smooth 98’1fm got wounded, while Adedoja Salam of TVC went into shock due to heavy bombardment of stones and bricks thrown at the press crew bus, leaving the windscreen and nearly all the side screens broken and vandalized.

Ogunrinde got wounded in the face, while Atsenuwa had his arm hit directly by one of the heavy stones thrown at the press crew bus.