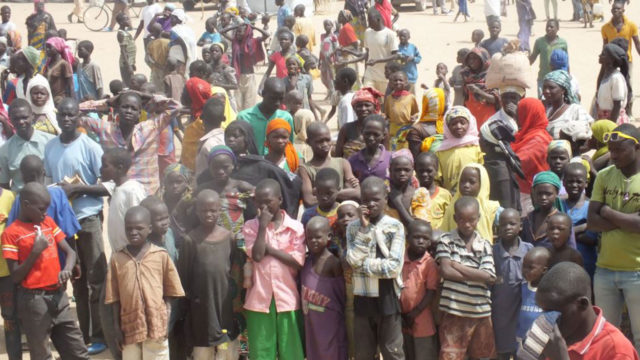 About twenty-two people have lost their lives at the Internally Displaced Persons (IDPs) camp in Jibia local government area of Katsina State.

Also more than 15,200 people who were displaced by bandits from the villages of Shimfida, Zango, Kwari, Tsembe, Tsauni and Mai-Wuya communities are currently taking refuge in the camp at GGSS, Jibia.

The chairman of the IDP camp, Malam Saad Salisu Shimfida disclosed this while speaking with some journalists in Jibia on Monday.

Salisu who is also the chairman of the Shimfida Youth Development Association said this is a result of the bad environment they are forced to leave in, hunger and Malnutrition among little children.

He said most of them sleep on the bare floor, while others take their rest on mats provided by the local government authorities.

Another disturbing development as Salisu explained, was that the vast majority of the children both in the town and in the camp could not have access to education.

“We have over 3,000 children in this camp that left their communities with school uniforms but now cannot go to school because the government hasn’t provided a school for them in the camp,” he said.

However, he also complained about the situation in the camp, stressing that, the camp is not secured as there is no security personnel attached, no water and no health facilities.

He added that, at the initial stage, they were being fed thrice a day, which later became twice a day, adding that, they are presently feeding once a day.

Salisu said they have been in the camp for the last three months and that they would prefer to return back to their communities to enable them to farm their lands, adding, “Our people are suffering from hunger and malnutrition.”

He pleaded with the state government to provide them with the necessary security structures, to enable them to benefit from the rainy season in order to make life better for themselves and their families.

Reacting to the development, the Jibia Local Government Chairman, Bishir Sabi’u, said the government had provided adequate relief materials to the IDPs.

“Fifteen bags of rice are being cooked for them in the camp daily. I do give them N200,000 weekly to support their daily activities in the camp,” he said.

Emir of Kano returns from Morocco