The anointed Kano state gubernatorial aspirant of All Progressive Congress (APC) and current deputy governor of the state, Alhaji Nasiru Yusuf Gawuna , on Wednesday night paid a visit to another APC guber aspirant Inuwa Waya in his house.

Although the purpose of the visit was not disclosed to the media, political analysts in the state are of the view that the visit has shown the level of understanding that exist between the two contestants as they portray sense of maturity in their conducts. 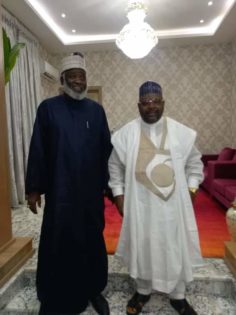 However, others are of the view that the deputy governor’s visit was a move to strike a balance in convincing Mr Waya to accept consensus during the upcoming primaries.

Many believed its a fence mending considering the mass defection affecting the APC in Kano to NNPP.

Solacebase reports that after the anointing of Nasiru Gawuna as governorship candidate and Murtala Sule Garo as deputy by governor  Ganduje, Waya was said to have insisted that he will prepare to go to primaries and test the political water.

Salami Panel: Magu will still be prosecuted if indicted despite promotion – Minister