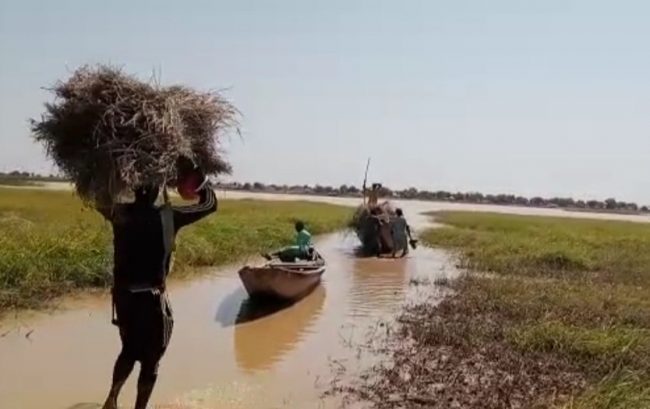 Following the recent boat mishap in Shagari Local Government Area of Sokoto State that killed 29 people, Dateline Nigeria revisits a similar story in the same LGA in which 13 people died.

When in June 2021, the people of Ginga, a riverine community in Shagari Local Government Area of Sokoto State lost 13 members, mostly women and children to boat accident, they received sympathy from far and near.

One condolence visit they still remember is that of Governor Aminu Waziri Tambuwal, especially because of the promises he made, which included the provision of life jackets for marine travelers and the replacement of dug-out canoes with motor boats.

He even directed that no boat should be allowed to sail through the waters without its passengers wearing life jackets.

But 10 months after Tambuwal’s pronouncement, the Sokoto State government has failed to provide either life jackets or motor boats to Ginga, the riverine community that suffered the tragedy. The people are left with no option than to continue crossing the water without any protective gear.

Our reporter, who was at the scene of the incident, learnt that some of the residents were yet to recover from the shock which, according to 70-year old Malam Muhammadu, was the major water mishap recorded in the area.

“There were other incidents but they were not as fatal as this one because it involved one of the largest engine in the area with so many people on board,” he said

“Shortly after the incident, the governor visited and promised us more boats and life jackets which one can wear while on board, but these have not been done. We only rely on God for a succor,” Muhammadu, whose farm was across the river, said.

Another resident of the area who lost some of his relatives to the incident, Malam Abubakar Umar, recalled that 18 passengers, who were mostly women and children, were aboard the boat when it capsized.

“Thirteen passengers were initially reported dead, but one was later rescued alive, making the number of the survivors to six persons,” he said

“The victims were on their way to a wedding ceremony at Doruwa village before the unfortunate incident,” he said

According to Umar, the boat had almost reached the bank of the river before it was diverted by heavy water waves and later capsized.

Aminu, one of the sailors interviewed, said they could not abide by the governor’s directive since life jackets have not been given to them.

The sailor, who said he has been in the business for two years, noted that this was not the first time a boat capsized in the river, recalling that three lives were lost to boat mishap last year.

Our reporter observed that the only way to the river was a rocky and Sandy bush path and one could only go there either by foot or on motorcycle. The distance between the village and the river is about six kilometers and majority of the locals cover it by foot.

Moreover, Ginga, which is under Shagari Local Government Area, is 37 kilometers from Sokoto.

The river which is a tributary of Shagari dam links Ginga with many communities and some of their daughters were married there.

The village head of Ginga, Malam Abubakar Ibrahim, could not give the exact number of people crossing the river every day “because they are many”.

Malama Hauwa’u, who was boarding a boat to her hometown, said they were not discouraged by the recent mishap because “this is the only means of transportation in the area.

Hauwa’u, who also spoke in Hausa language, noted that “We don’t have a choice because this is the only means of transportation here unless one will remain in his village without going anywhere.

“But if you must travel, if you must visit your relations in other villages, this is the only alternative unless government construct a bridge for us,” she said

Corroborating this, the village head of Ginga said the distance between them and neighbouring villages were not more than three to four kilometers, but they cover over 30 kilometers now to reach them.

“If government can construct a bridge across the river, it will help in reducing our suffering immensely,” he said

Malam Ibrahim also requested for a road linking the community with the river and potable drinking water in the village.

“And this could be as a result of too many demands on his head but we are still optimistic that he will one day revisit our plight and do the needful.”

Attempts to speak to Sokoto State government officials were not successful. While the deputy governor’s phone number was not connecting, Tambuwal’s spokesman Muhammad Bello did not respond to Dateline Nigeria’s request for comment.

Investigation: How cholera killed many in Jigawa after govt claimed it spent billions…

Prev Next
90 Comments
Leave A Reply