Fact-Check: Is drone footage of bandits cooking in the forest from Nigeria?

Claim: Recently, a Facebook user shared drone footage of armed bandits cooking in the forest claiming they were the notorious terrorists responsible for kidnapping Nigerians.

Verdict: Investigations by PRNigeria show that the footage first emerged in Kenya, showing armed cattle rustlers hiding in a dense group of bushes and trees in Pokot area of Kenya. The footage does not show Nigerian bandits.

Full Text: Following the recent attacks by bandits on the Abuja – Kaduna train track which left some killed and scores abducted, many Nigerians have expressed concerns about the worsening state of insecurity in the country especially along the Abuja-Kaduna axis.

Also reacting, a member of the All Progressives Congress (APC) in Lagos State, Joe Igbokwe, shared video footage claiming that it is footage of bandits who have been kidnapping Nigerians. 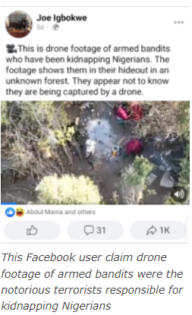 “This is drone footage of armed bandits who have been kidnapping Nigerians. The footage shows them in their hideout in an unknown forest. They appear not to know they are being captured by a drone,” he posted along with the footage.

The footage, said to be of bandits enjoying themselves in a forest in Northern Nigeria, was massively distributed across different online platforms.

Commenting on one of the YouTube video shared, a user who identified as “Life Helps” said, “See how easily affordable technology can solve bandit/terrorist problem in Nigeria if the government REALLY wants to solve the problem. Armed drones, owned by each state, will eradicate these low-lives within a short time(sic).”

Similarly, keyword searches on Google reveal a YouTube video of the footage posted by Trending Videos Kenya on Sunday, April 3, 2022, and not 4-5th April when it started trending on Nigerian cyberspace.

The search result also revealed the report appeared in a Kenyan publication https://www.tuko.co.ke on the 4th of April 2022.

The report reveals the bandits who are armed cattle rustlers have been terrorising the residents of Pokot, Laikipia, Baringo and Samburu counties and confiscating their cattle.

It further narrated that they were captured by the country’s General Service Unit drone (GSU) captured hiding in a thicket with stolen livestock in a location called Pokot County.

According to the report, the burglars were making breakfast in the bush when they caught a glimpse of the drone recording them.

They could be seen trying to shoot it down unsuccessfully with their arms. They seemed to have spent the night in that part of the bush as shown in the clip.

Footage of Armed cattle rustlers in Kenya caught in a thicket by the country’s General Service Unit drone (GSU) was being passed off as that of bandits in the Northern Nigerian region. The claim is Misleading.

Update on bandits nabbed by Soldiers in Kaduna

Prev Next
121 Comments
Leave A Reply