Court restrains Kano LG from taking over farmlands of 370 farmers 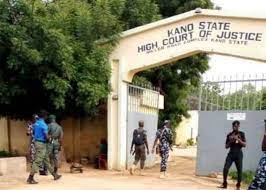 A Kano High Court has restrained Madobi local government council, its Chairman, Muhammad Lawan Yahaya , state government and four others from taking over farm lands from farmers at Kafin-Agur ward in Madobi area of the state.

The presiding judge, Justice Sanusi Ado Ma’aji gave an exparte order on Tuesday in a suit filed by Yunusa Abdulmuminu and 369 others.

Solacebase reports that the plaintiffs are accusing the defendants of forceful take over of their farmlands, in the local government area.

The exparte order was granted sequel to a 27 paragraph motion exparte filed by Barrister Abba Hikima with a sworn affidavit by Yunusa Abdulmuminu.

Justice Ma’aji restrained the respondents/defendants or their agents from taking over or trespassing on the farmlands of the plaintiffs/applicants pending the hearing and determination of the motion on notice.

The judge also gave an order stopping the 7th respondent, Kano Police Commissioner, from arresting or harassing the applicants or deploying his men to forcefully takeover or tamper with the applicants lands, farms and houses.

The matter was then adjourned to April 19th 2022 for hearing of the motion on notice.