Kano state government on Sunday inaugurated this year’s Ramadan feeding program with a view to alleviating the suffering of the less privileged.

Inaugurating the program at the premises of Kano state printing press the state acting Governor Alhaji Nasiru Yusuf Gawuna enjoined the committee members to be just in the discharge of their assignment.

Gawuna who spoke at length on the importance of feeding the needy in Islam especially in this holy month of Ramadan called on people to take part in view of its relevance.

This was contained in a statement issued by the Public Relations Officer, Ministry for Local Government and Chieftaincy Affairs Lawan Hamisu Danhassan on Sunday.

The statement said the state commissioner for local government and Chieftaincy Affairs, Alhaji Murtala Sule Garo said the government has provided five hundred and fifty million naira for the success of the feeding program in the 140 centres across the eight  metropolitan local government areas. 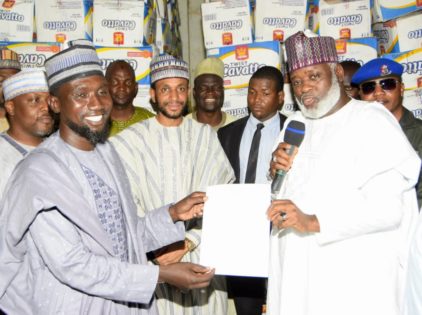 ‘’The commissioner added that the food items provided to ensure smooth running of the exercise include bags of rice, beans, flour, millet, palm oil as well as groundnut oil, ‘’the statement said.

Garo therefore reiterated the state government’s commitment to assist the less privileged and other vulnerable in the society.

NDLEA seizes N5bn worth of tramadol in 3 states

Prev Next
11 Comments
Leave A Reply