Six chairmanship aspirants have written a letter of withdrawal from the race at Saturday’s national convention of the ruling All Progressives Congress.

A cover letter was also written jointly signed by all the aspirants.

It was gathered that the letters were later handed over to the Secretary to the Federal Government, Mr. Boss Mustapha at about 2am for onward transmission to President Muhammadu Buhari by Sen. George Akume and Mohammed Etsu. 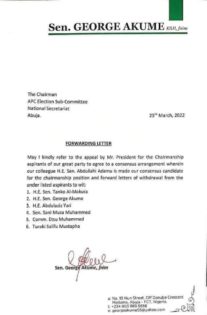 JUST IN: Tension at Kaduna airport as bandits prevent aircraft take off, kill one staff