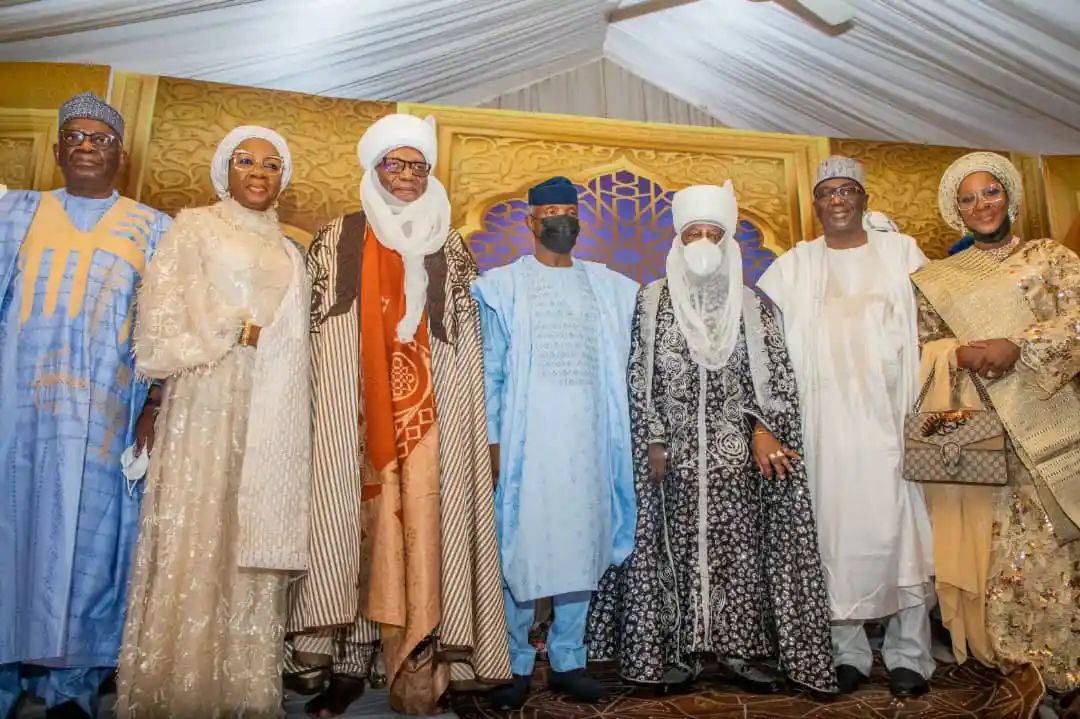 Vice President, Yemi Osinbajo, on Friday in Ilorin, Kwara, congratulated Dr Alimi AbdulRazaq, a renowned legal practitioner and entrepreneur on his installation as the new Matawali of Ilorin.

The royal turbaning of the new Mutawali, who is the elder brother of  Gov. AbdulRahman AbdulRazaq of Kwara, was performed by the Emir of Ilorin, Alhaji Ibrahim Sulu-Gambari, in his palace.

Solacebase reports that Mutawali means Chief Economic Adviser to Ruler of an Emirate.

Osinbajo said that the new Mutawali, who had been his acquaintance of many years, had creditably acquitted himself in the legal profession, philanthropy, investments in education, among others.

“It gives me such great joy to join you all in the celebration of my dear brother and friend, as he receives the title of Mutawali of Ilorin, in this special turbaning ceremony.

“Perhaps one of the great tragedies of history and time is the inability of people at times who have been chosen for great offices to rise to the stature of the office.

“The repercussions are often sharp and enduring, diminishing the man and the office along with him.

“But there are momentous occasions where hope and history rhyme and a man is chosen who gracefully ascends to the height of the responsibility that has been thrust upon him.

“Today and now, we are in one such moments as clearly evidenced by the pedigree and accomplishments of  AbdulRazaq, whom I have had the privilege of knowing up close: we were classmates at the law school and have been friends now for over 40 years.

“His track record of excellence and service in the legal, business and public spheres, are widely known. Bridge House College , FMB Holdings, his law firm, House of laws.’’

He said it was also a testament to the quality of Ilorin, that AbdulRazaq followed in succession to the mighty example of his great father  Alhaji AbdulGaniyu  AbdulRazaq, the first Mutawali of Ilorin.

“The apple doesn’t fall far from the tree as they say.’’

According to the vice president, all attest to the fact that the new Mutawali of Ilorin brings many qualities to the title.

He said AbdulRazaq was a first class mind who has navigated the legal profession, and the complex worlds of business and politics at the highest levels possible, strictly on the merit of his own capacity and the weight of his contributions.

“`But what stands him out indispensably, particularly for this role, is his compassion, his firm belief in the upholding of human dignity at all levels.

“His PhD. thesis on Human Rights Protection in Africa set the framework for the establishment of the African Court of Human and Peoples Rights, which was subsequently commissioned by the Organization of African Unity (OAU), which is now African Union (AU). Years later, in the same spirit, he founded the Nigerian Council for Human Rights, serving as its Executive Secretary for ten years.

“The extent of AbdulRazaq’s philanthropy is a matter of public record.

“His investments in education, and in ensuring that as many people as possible, within his sphere of influence, get quality education, and a good shot at a better life, have earned him well deserving laurels and awards, home and abroad.

“The title of Mutawali of Ilorin, no doubt, finds a natural home in this great believer in humanity and supporter of many.’’

Osinbajo prayed God to grant the recipient the wisdom and capacity to bear the responsibility with the same commitment, grace, compassion, selflessness, with which you have borne your illustrious career and extensive accomplishments.

The vice president commended the Emir of Ilorin on his enviable achievements as a legal practitioner.

He said that Sulu-Gambari was a man of repute who had made immense contributions to the growth of his kingdom, state and Nigeria in general.

“Those of us who are not from Ilorin here feel a part of Ilorin because of my dear father, the Emir of Ilorin, whose competence and accomplishments as a legal practitioner and as a Court of Appeal Judge not just any type of accomplishment.

“He is man of integrity; a man known for his integrity…I just want to commend the Emir for that entire he has been doing over the years and his great service not just to this state and this kingdom but to our entire nation.

“I also bring you the very warm felicitations of President Muhammadu Buhari; he congratulates you today and congratulates this great kingdom on the installation of the second Mutawali Of Ilorin,’’ he said.

Offering his royal blessing, Sulu-Gambari expressed appreciation to the vice president for gracing the occasion.

He prayed God to grant the vice president his heart desires.

The event attracted the Chief of Staff of to the President, Prof. Ibrahim Gambari, state governors, members of the National Assembly, members of the Federal Executive Council, service chiefs, among others.(NAN)

Why I slapped Obiano’s wife – Bianca