A letter written by embattled APC caretaker committee national Chairman, Mai Mala Buni has indicated that he was not sacked by President Muhammadu Buhari from the position but rather handed over properly.

Solacebase reports that a letter by Governor Mai Mala Buni, faulted Governor Nasir el-Rufai’s narratives on his purported removal as the chairman of the Caretaker Extraordinary Convention Planning Committee (CECPC).

The letter dismissed El-Rufai’s claims that Buni was sacked as the party’s chairman.

The situation has deepened the crisis in the All Progressives Congress (APC).

Buni’s camp claimed that the embattled APC caretaker Chairman legally handed over the affairs of the party to Governor Abubakar Sani Bello before travelling out.

In the letter, dated February 28th, Buni directed Governor Bello to act in his absence as the chairman of CECPC because he will be away for a medical trip to Dubai.

The letter was copied the Independent National Electoral Commission (INEC) and all members of CECPC.

The letter, which was exclusively obtained by THE NATION, reads: “This is to please inform you that I will be embarking on a medical trip to the United Arab Emirates (UAE) from today, 28th February, 2022.

“In my absence, I hereby transmit the functions of my office as the National Chairman of the Caretaker Extraordinary Convention Planning Committee (CECPC) to you.

“This is to enable the committee conclude all arrangements leading to the National Convention slated for March 26th, 2022 and other duties that may be required of the office.

“I invite all members to cooperate with Governor Abubakar Sani Bello by extending to him all the support that I have enjoyed from you.

“Please do accept the assurances of my best regards.”

In an interview with Channels Television, el-Rufai said he had the authority of the Chairman of the Progressive Governors Forum (PGF), Governor Atiku Bagudu, to explain the action that led to the appointment of the Niger State Governor, Abubakar Sani Bello as acting chairman of APC. 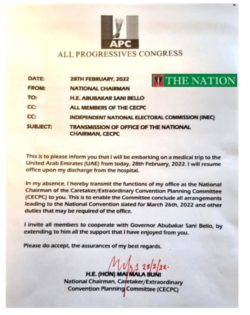 An aide to Buni, who spoke in confidence, said: “Buni couldn’t have been removed by anybody or a group of Governors because his letter was explicit. He followed due process and nominated Bello to act for him.

“Governor el-Rufai should tell Nigerians what actually transpired between President Muhammadu Buhari and some governors last Sunday. His narratives are faulty.

“Nigerians should ask Bello and CECPC members if such a letter came to them from Buni.”

Ahead of 2023 General Elections : RCCG creates new directorate for politics

Prev Next
40 Comments
Leave A Reply