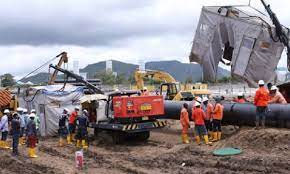 The News Agency of Nigeria (NAN) gathered that the AKKP was approved by the Federal Government, aimed at transporting natural gas from Ajaokuta, in Kogi State, to Kano, in Kano State, through several states and urban centres.

Ahmed made the disclosure on Monday in Kaduna when he spoke as Guest Speaker at a Public Lecture in honour of Mr Suleiman Umaru, Emir of Lere in Kaduna State,  organised by  Kaduna Chapter of Nigerian Society of Chemical Engineer (NSCHE)

“We have so far made tremendous progress as the project is about 73.3 percent completed, with only about 23.5 percent remaining.

“We have splitted the project into two to make sure it is completed at the earliest time possible since we are working within the timeline of 2022”, he said.

He said the Federal Government supported the initiative and was pulling resources to ensure that it was not truncated.

“The immense opportunities are that Kaduna will have access to 900 megawatts of power generated by the time the AKKP is completed, and also have enormous access to gas that can support the springing up of industries and petrochemical plants,” he added.

Also, Mr Idris Bugaje, Executive Secretary of National Board for Technical Education (NBTE) who was Chairman of the occasion, described AKKP as an important project, adding that upon its completion, it would solve the problem of inadequate power supply.

“Most states, especially in the Northern states, get only one or less than one percent of what TCN transmits, as such, the AKKP is an opportunity to generate power and distribute to communities and industries,” he said.

Earlier in a welcome address, Mr Saidu Mohammed, National President of NSCHE, noted that although there had been challenges with the gas sector which other sector depended on, he was optimistic that desired results would be attained.

Mohammed congratulated organisers of the event and urged participants to make good use of knowledge gained from presentations made at the occasion.

In his remarks, Mr Umaru, Emir of Lere, commended the organisers and called for synergy amongst professionals to enable them impact positively on the people. (NAN)

Prev Next
103 Comments
Leave A Reply