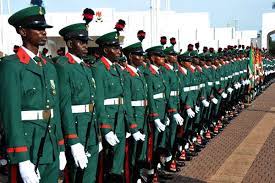 The Nigerian Defence Academy NDA commissioned 295 cadets of the Short Service Course 47 into the Nigerian Army on Saturday in Kaduna.

Minister of Defence, retired Maj.-Gen. Bashir Magashi, was the Reviewing Officer at the passing out paraded of the new officers.

“As you graduate today, you will be joining the corps of gallant Nigerian Army officers leading soldiers in various theatres of operations across the country.

“They would support you in building on the foundation laid by the Academy.

“From today onwards the army is your tribe and the Armed Forces your constituency,’’ Magashi told the new officers.

He said it was their responsibility to learn fast and adapt to their operational environment, noting that their career progression would depend on their individual character and efforts at self-development.

The minister admonished the new officers to defend and protect the Constitution of the Federal Republic of Nigeria and serve the country selflessly with loyalty and integrity.

“We expect you to set new records of gallantry in the defence of our country.

“Former cadets of this Academy did same during the Nigerian civil war; in Chad, Bakassi and ECOMOG operations and more recently, in all the on-going operations across the country, especially in the northeast.

“You must remain good ambassadors of Nigeria.

“To the two officers from Liberia, note the invaluable role Nigeria played in restoring and stabilising your country.

“The sacrifice and gallantry of the Nigerian Army during the ECOMOG operations remains a reference point in the region and in the world at large.

“Most of the serving and retired Generals in the Nigerian Army, including myself and the Chief of Army Staff remain very proud of our service in Liberia and cherish the friendly relations that exist between our countries.

“Therefore, you must serve your country with honour and loyalty,’’ Magashi charged.

He said the Armed Forces and other intelligence and security agencies would continue to count on the support of all Nigerians in the collective effort to deal with all threats to national security.

The News Agency of Nigeria (NAN) reports that the event witnessed piping ceremony and presentation of awards to deserving officers. (NAN)