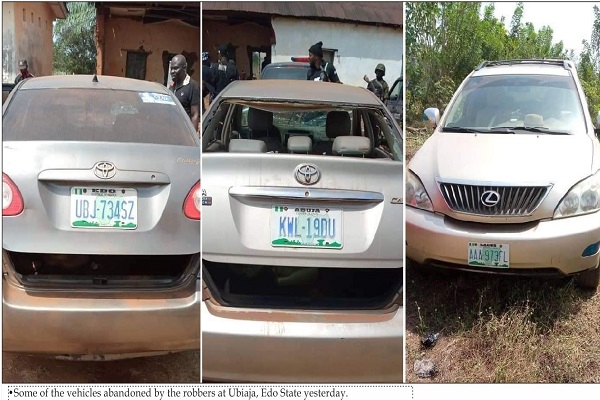 Twenty four hours after bank robbery incident, in Edo State, the police have said that cash of over N37m, four vehicles, and two motorcycles believed to have been abandoned by the fleeing robbers have been recovered.

In the course of the robberies, eight persons made up of two policemen and six civilians including a mad man reportedly lost their lives.

The items were said to have been abandoned near the railway on the road to Ubiaja when youths from the area reportedly mounted barricades when they heard of the incident in Uromi which is a few meters from the scene of the robberies.

The statement reads: “Today 25/02/2022 at about 0730 Operatives of the Edo state police command in conjunction with local Vigilantes accompanied by Chief John Odijie, the Oniha of Ubiaja led by the DPO Ubiaja acting on credible information that some vehicles suspected to have been used by armed Robbers in Uromi Bank Robbery Operations on the 24/02 /2022 were seen hidden in Oruen Quarters Bush of Ubiaja in Esan south East Local Government Area of Edo State.

“On receipt of the information, the Divisional Police Officer in charge of Ubiaja mobilized his men who during the bank robbery operations blocked all the exit routes from in and out of Uromi town, together with the team immediately mobilize to the location and recovered the following vehicles and items; One Red Colour Camry car with Reg.No. EZA 105 KJA, One ash Colour Camry Car with Reg. No. KWL 19 DU, One Dark Ash colour corolla car with Reg. No. UBJ 734 SZ, One Lexus 330 car with Reg. No. AAA 973 FL, One Red Q. Link M/CYCLE With Reg. No. EZA 105 QN, One Red Day Long M/Cycle With Reg. No. ENU 204 QL, Two small bags containing women’s Items, one Union Bank ATM card and Cash Sum Thirty-four million, five hundred and ten thousand Naira only ( #34,510,000.00). “Meanwhile the Commissioner of Police Edo state police command CP Philip Aliyu Ogbadu while symphatizing with the families of those who lost their lives in the unfortunate incident Promised not to relent until all those behind the attack are bought to face the full wrath of the law.”

This statement by the police came a few hours after Governor Godwin Obaseki represented by his deputy, Comrade Philip Shaibu in the company of the Speaker of the state house of assembly, Hon Marcus Onobun, and other government officials and security officials visited the area of crime where a thorough investigation and arrest of culprits were promised.