The Image Merchants Promotion (IMPR) Limited, publishers of PRNigeria in collaboration with The Media Today (TMT) on Wednesday, unveiled a book on the Chief of Defence Staff, CDS, Gen. Lucky Irabor.

The 119-page book, whose blurb was written by Senator Kashim Shettima, a former Borno State Governor, is titled “Gen LEO Irabor: The Pearl of Defence.”

The book, published to commemorate the first-year anniversary of Irabor as Nigeria’s Defence Chief, was authored by Mahmud Abdulsalam, an Assistant Editor with PRNigeria.

The book is an effort to chronicle the policy initiatives and key strategic activities that Gen. Leo Irabor has launched, or carried out since he assumed office as the Chief of Defence Staff.

The publication was officially unveiled by Gen. Lucky Irabor and assisted by top military officers and editors at the Defence Headquarters (DHQ), in Abuja.

It was during the ‘Chief of Defence Staff Parley with Editors and Media Executives,’ where the publisher of PRNigeria, Mr. Yushau Shuaib as a Guest Speaker spoke on “Fake News, Fack-Check and National Security.”

The parley themed, “The Role of Editors in National Security and Conflict Sensitive Communication,” was well-attended by publishers, editors and bureau chiefs of various media organisations, in the country.

Some illustrious media personalities and veterans were also honoured with special awards, at the event organized by the Defence Headquarters (DHQ), in collaboration with The Media Today (TMT) International. 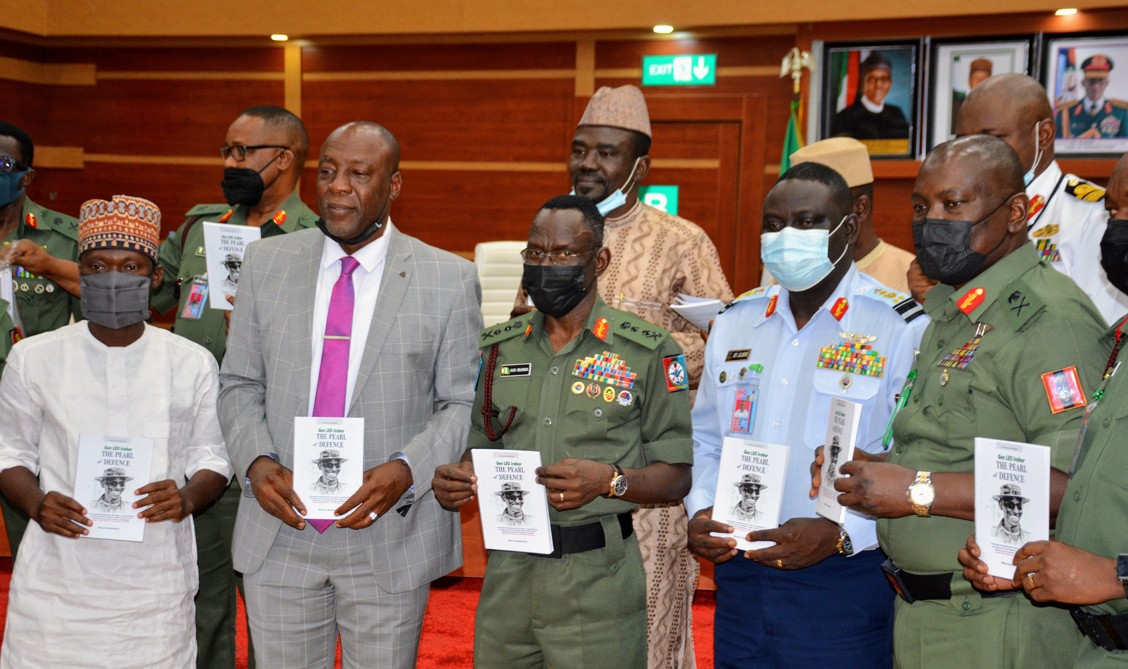 Explaining the idea behind the book, Barrister Sunny Charles Odenigbo, the Chief Executive Officer of TMT, disclosed that the CDS was ‘deliberately’ not informed about the publication because it was planned to be a ‘surprise gift’ for him, as he marks a year in office.

He said “Gen LEO Irabor: The Pearl of Defence,” so far remains the first and only bold attempt to dispassionately chronicle, in an in-depth, appealing and elaborate manner, the military strategies and policy reforms formulated by the CDS to add value to Nigeria’s security and defence architecture.

Added Odenigbo: “The highpoint of Gen. Irabor’s leadership, as encapsulated in this intellectually-enriching and mind-engaging book, is building synergy, partnerships and collaborations with relevant stakeholders in the country, and even foreign militaries like the California National Guards, among others.

“The author has done the Nigerian military hierarchy a great favour, by taking up the job of being its publicist: one that has breathtakingly showcased the outstanding efforts and contributions of not only their leader (in this case, Gen. Irabor), but the entire members of the Armed Forces in tackling the security woes bedevilling the nation.”

In the blurb to the book, Senator Kashim Shettima states that “A thorough bred professional, Gen Irabor is a personification of positive traits in the Nigerian military, Verily, he is an intellectual of uncommon courage and sagacity”

Earlier in his keynote address, Gen. Irabor, underscored the need for the media, particularly publishers and editors, to forge and strengthen partnerships with the military, as part of measures to safeguard national security and assist the Nigerian Armed Forces to tackle lingering security threats.

Prev Next
13 Comments
Leave A Reply