Some passengers are feared dead as a moving train crushed a Dangote Cement trailer and commercial tricycle in Kano.

The incident occurred on Obasanjo Road in Kano metropolis at 11:30am on Sunday.

Eyewitnesses, who run businesses near the rail-track, said they saw the trailer coming towards the rail line as the train was speeding.

The train with registration number 30439(SPA) was said to have brought passengers from Lagos to Kano.

The witnesses said they attempted to flag down the trailer but the driver didn’t notice. 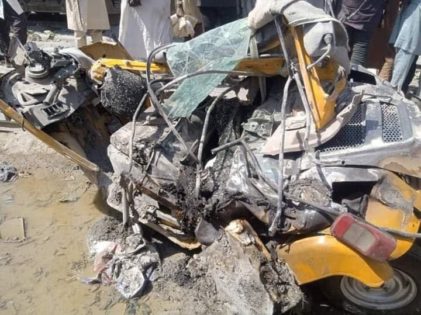 “When the driver of the trailer tried to cross the rail line, the train hit the vehicle and the tricycle at the same time,” said one of the witnesses.

According to Daily Nigerian,  witnesses said the passengers in the tricycle had been rushed to hospital unconscious, while the driver of the trailer was said to have escaped unhurt.

More than 20 passengers, including pupils of Madinatu Islamiyya School in Bagwai Local Government Area of Kano State, have died in a boat mishap. The boat capsized while on its way from Badau village to […]

Kano Electricity Distribution Company (KEDCO), through the Special Investigation and Prosecution Taskforce on Electricity Offences (SIPTEO) says it recorded a boost in the fight against energy theft in its franchise. According to KEDCO Management, SIPTEO […]

Ungogo local government council, in Kano State has restated commitment to prioritizing education in its development agenda. The Council Chairman, Engr. Abdullahi Garba Ramat announced this on Tuesday at the commissioning of blocks of classrooms […]