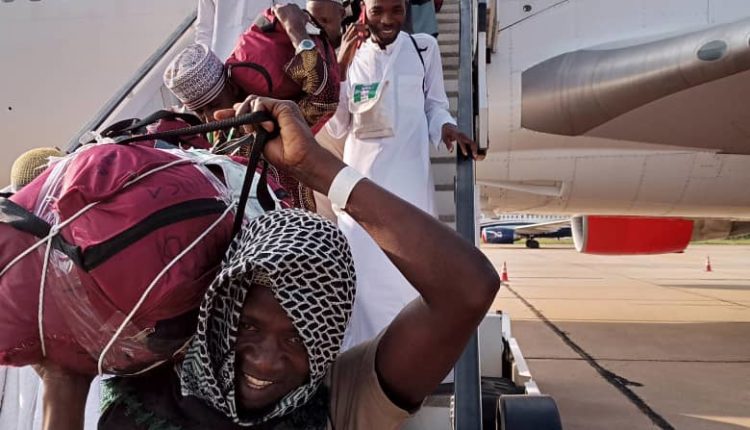 The first batch of pilgrims from Saudi Arabia that participated in this year’s Hajj rites from Kwara State arrived Ilorin International Airport  on Thursday at about 7. 59 am.

Solacebase reports that the pilgrims departed Jiddah International Airport via Max Air Flight number  NGL 2010  with 541 pilgrims on board including 10 NAHCON officials.

They were received by friends, family, well wishers and some officials of the state pilgrims welfare board.

Speaking on the exercise, the Special Assistant Religion to the state governor, Alhaji Ibrahim Dan Maigoro who is still in the holy land commended the state governor,  Malam AbdulRahman Abdulrazaq and the Amirul Hajj, Dr Awa Ibrahim Akewusola for providing adequate logistics for the pilgrims.

Alhaji Dan Maigoro also praised the pilgrims for the patience and  their behaviors while in the holy land.

According to him, the pilgrims offered special prayers for peace and security to reign in the state and the entire nation more so that Nigerians are preparing for a general election.

The Executive Secretary of the state Pilgrims Welfare Board,  Barrister AbdulGaniyu Ahmed assured that all arrangements are already in place to ensure smooth airlift  of the remaining pilgrims.

According to him,  the second batch are expected to be airlifted home on Tuesday, twenty sixth of this month stressing that the pilgrims were returned back home in line with how they were transported to the holy land.

In his remarks, the state Amirul Hajj,  Dr Awa Akewusola described this year’s pilgrimage as hitch free more so that there is no case of any missing pilgrim or casualty.

According to him, preparations are being concluded for the successful airlifting of the second and third batches of the state pilgrims but appealed to the pilgrims to be patient more so that it is not only Kwara pilgrims that are being airlifted to their various destinations by the designated airlines.

Three of the pilgrims that spoke with our Correspondent on arrival, Alhaji Muhiyudeen Jide Oseni, Alhaja Latifat Kehinde Olatinwo and Alhaja Zainab Sanni thanked God for the safe trip back home and commended officials of the board, the state government and the Amirul Hajj,  Dr Awa Akewusola for his welfare package and concern for them before their departure and while in Saudi Arabia.