Lawyers describe legal advice as the professional opinion regarding the substance or procedure of the law, in relation to a particular factual situation.

It is therefore an advise given based on the analyses carried out on a set of facts, which would permit for a decision to be taken on a specific course of action, in compliance with the applicable law.

The advisee gives the adviser the latitude out of the confidence that he or she would act in line with the truth, as sworn to in the oath of office. Anything done in the contrary amounts to abuse of trust, which may arise, probably out of the need for exploitation, by selfishly taking advantage of the perceived laxity of the advisee.

In Nigeria today, as the elected President of the country, President Muhammadu Buhari, who is the head of state and who exercises authority over the governance of the country, is largely dependent on the advise of selected and not elected advisers, amongst whom is a legal adviser.

Although he is not under any obligation to abide, or necessarily oblige the advise of any adviser, but when it comes to the advise of a legal adviser, it would be foolhardy for him to ignore, or become apathetic, because everything in governance rallies round the rule of law, which occupies a position of unlimited importance. This gives the Attorney generals or legal advisers a large level of latitude to leverage upon.

Since the return to democracy in 1999, Nigeria has had more than eight Attorneys general, including the present one, Mr Abubakar Malami, SAN, of which the last three were seen to be the most powerful in terms of links, leeway, latitude and the leverage to give legal advise to the president. But the end became bad for them because they were accused of the abuse of office, by misleading the Presidents through wrong, selfish or ill legal advises.

By virtue of the confidence and trust placed on them by the President, some of the Attorneys general or legal advisers are accused of acting at variance with propriety, by misleading the President to act in ways that are unfairly to their own selfish benefit. This makes some of them behave like mini Gods, in the course of which they create unnecessary enemies for themselves and the President, their principal.

The immediate past Attorney general, Mohammed Bello Adoke, is still facing charges in court, after surrendering himself from a self-exile abroad. This goes to underscore the inevitability of nemesis, which is always there to support the law of Karma, that whatever happens to a person, happens because he or she caused it with through his or her actions.

In Nigeria’s situation today, unless Attorney general Abubakar Malami, SAN, works hard and fast, to disabuse the minds of the general public, through effective evaluation and control of the circulating cynicism, the country would continue to question his conscience, particularly as it affects the credibility of the legal advises he gives the President.

Malami may be doing justice to whatever assignment he is given, but as a lawyer, he knows better than me, that, justice is done only when it is seen to be done. Suspicion, accusations and misgivings would continue to trail Malami’s actions, whenever he gives advise to the President and the outcome of the President’s action tilts in favour of his considered interest.

PMB had acted on many occasions in manners that brought those actions to undue doubts and disrespect, by people that hitherto held the President in high esteem. The general believe is that those actions were carried out on the legal advise of Malami, as the Attorney general of the Federation. Pursuant to such actions, the AGF lost respect for self, and by extension respect for the country.

For the first time in the history of the Nigeria Police, the office of the Inspector General of Police went to court with the Police Service Commission on matters of recruitment. That embarrassment was alleged to be on the advise of Malami, as Buhari’s legal adviser.

There are some silent actions that negatively rubbed off on the President, which were allegedly carried out on the legal advise of Malami, including the three months ridiculous extension given to IGP Adamu Mohammed. If an extension of tenure is to be given, the reasonable mind would have thought it would be for a minimum of one year. For anything meaningful to be done during the extension, three months is simply unreasonable, absurd and perceived to be preposterous.

It is an open secret that Malami is eyeing the position of the Governor of Kebbi state, and in the pursuit of this endeavour, he can not claim to be unaware of what had happened to his predecessors, and the inevitability of collusion with the law of Karma.

There is a cliché that is indirectly accusing the President of laxity, and directly questioning the latitude given to Malami as the legal adviser, and currently circulating in the social media, accusing him of misleading the President in the appointment of the new substantive chairman of EFCC, young Abdulrasheed Bawa. Malami is accused of nepotism in picking Abdulrasheed, who is alleged to be his nephew.

The cliché is calling on the Senate to do the needful, and it reads:

The 40-year-old Abdulrasheed Bawa, a relation to the Attorney General and Minister for Justice, Malami, is not qualified to be the Efcc Chairman:

– He spent ONLY 16 years in the Commission

According to Efcc Establishment Act, Section 2a (ii) the Chairman to be appointed should :

The Efcc Law is an Act of National Assembly hence Senate must not overrule itself by breaching a critical provision in the appointment of Efcc Chairman.

The Attorney General has violated the law and misled the President in sending an unqualified nomination to the Senate for confirmation in his bid to prepare the ground to be the Governor of Kebbi State come 2023.

Muhammad Rili: Reasons behind my aspiration as Ikara LG Chairman

Averting implosion in 2023-A. A. Gadzama

The Colloquium and politics by barter-Adamu Aminu 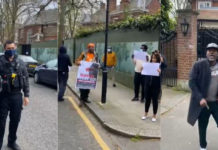 Buhari in London: The devil and the demon disgracing democracy-Bala Ibrahim