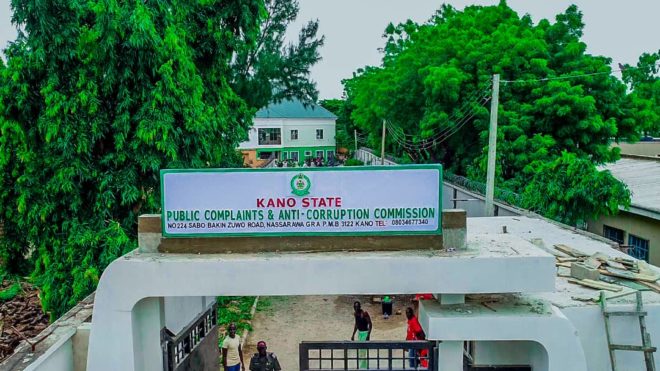 Corruption being an overwhelming catastrophe that has affected general development and services in Nigeria is a major agenda of the incumbent regime in the country.

The country has in the past topped the list of most corrupt countries in the world, but with the advent of the fight against the menace,  Nigeria has appreciated considerably.

Unlike in other states, especially the neighbouring Kaduna state, it is along this line that the Kano state government has established a very strong and independent anti-corruption agency currently led by a determined personality Barr Muhyi Magaji Rimin Gado, who has breathed life into the agency in the state in the last 5 years of service he had rendered, making it the most functional in the country among states.

The Kano Public Complaints and Anti Corruption Commission (PCACC) has really come to stay going by the recent developments that has not only physically uplifted the agency but has technically placed it on a pedestal that corruption itself would seek to migrate from the state.

The newly reconstructed office of the PCACC, which is next to the Government House in Kano, tells the whole story. Even as critics might share a different opinion about this, but it is true that Governor Abdullahi Umar Ganduje has proven his commitment to the fight against corrupt practices in the state by not only guaranteeing an independent practice of the anti-graft commission but by also solidly investing in its infrastructure and giving it a corporate national outlook.

Recently, Governor Ganduje had told the Association of National Accountants in Nigeria (ANAN) who were in the state for a retreat that “In Kano, we have the strongest anti-corruption institution. As a result of the work of our Anti-corruption agency, some commissioners lost their jobs. So also some Permanent Secretaries and Directors with the civil service have lost their jobs.

“Our anti-corruption staff are being trained by the Economic and Financial Crimes Commission (EFCC) and other anti-corruption agencies at the federal level so that they can be acquainted with modern practices in the fight against corruption”.

The former dilapidated structure that required renovation was immediately replaced by what is now standing as the anti-graft commission in Kano.

Less than N200 million was spent in the last few months in the renovation of the commission as well as equipping it with state of the art facilities.

Governor Ganduje ordered the total renovation of the commission that includes the operations department with males and female cells, standard and executive administrative offices, sophisticated modern communication equipment with mast and customised software for the activities of the commission.

A standard studio for audio/visual production and analysis. A canteen that produces subsidised food, a clinic that could ascertain conditions of accused persons under investigation and with all parts of the commission being accessible to even persons on wheelchairs. This is including the standard conference room that is also well equipped.

More so, in order to keep alive the standard of its activities, an anti-corruption institute has been established in the state with the capacity to award a fellowship.

In addition to this, the activities of the commission have been decentralized in such a way that they have offices at the Local Government levels that are also equipped with essential facilities that include vehicles and offices.

Meanwhile, the renowned head of the commission Muhyi Magaji is planning to upgrade the standard and performance of the staff of the commission further by giving them the necessary allowances, welfare and other remunerations to keep them loyal and committed. He believes in the saying that “Is either you give them or they give them”, meaning you should make the anti-graft staff comfortable enough to keep them from being bribed by accused to serve their interests.

He had complained that they have been the least paid anti-graft agency in the country and by extension in the entire world and so he believes, with the commitment of the state governor towards the fight against corruption, he is going to make the staff more immune to corruption very soon.

With the legacy put in place by the current chairman of the Kano anti-corruption commission, Muhyi Magaji Rimin Gado, it is clear that the fight against corruption in Kano has come to stay.

Muhammad Rili: Reasons behind my aspiration as Ikara LG Chairman

Averting implosion in 2023-A. A. Gadzama

The Colloquium and politics by barter-Adamu Aminu