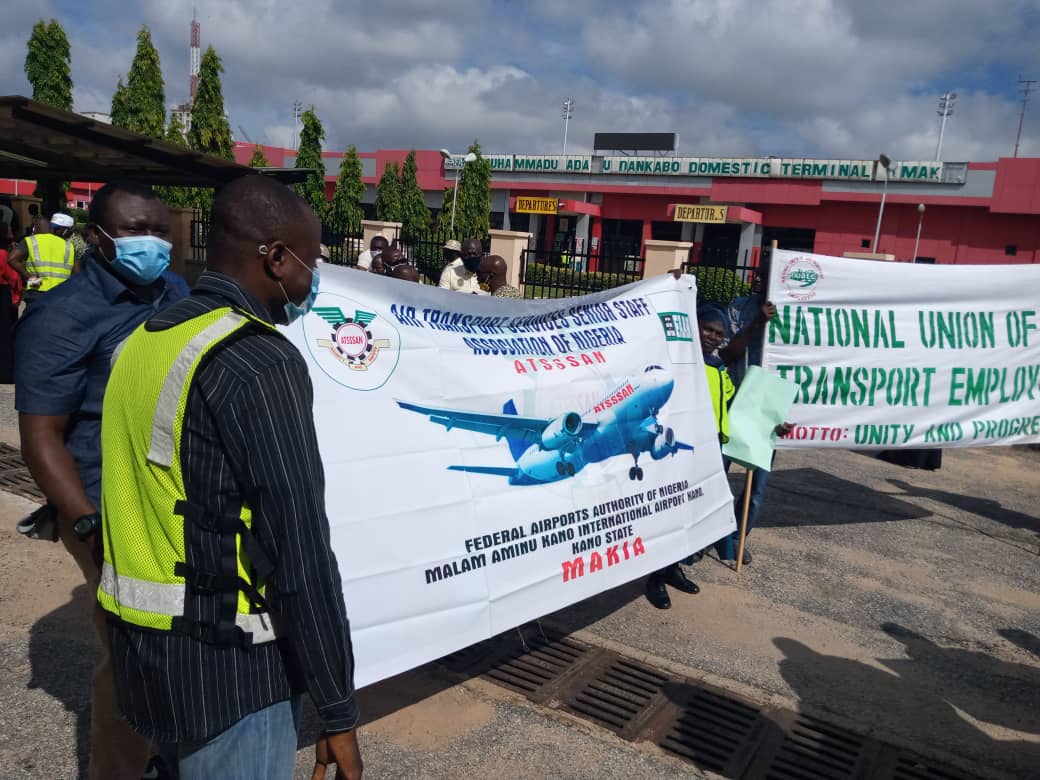 Unions in the aviation industry at the Malam Aminu Kano International Aiport, Kano have converged on the airport premises for a peaceful protest staged against plan to concession major airports  by the Federal Government.

They are similarly kicking against the government directive to return all staff that retired from 1st April, 2014 to contributory pension.

Recall that federal government has revealed readiness to give out terminal building, toll Gates and non aeronotic areas to private operators in public private enterprise.

The staff carrying placards with various inscription moved around the airport premises and singing solidarity songs.

Solacebase reports that National Union of Air Transport Employees, NUATE, Association of Nigeria Aviation Professionals, ANAP and the Air Transport Services Senior Staff Association, ATSSSAN, say the action was to prevail on the federal government to have a rethink in a positive direction.

He explained that concession poses job loss in the aviation industry and a threat to national security.

”Why embark on selective concession, if not a ploy to destroy FAAN, ”the union leader asked.

He cited the concession of Murtala Muhammad (MM2), Lagos and the defunct NEPA that failed to yield positive output but rather crippling carrier and sending retirees to early grave.

The union leader disclosed that FAAN staff are satisfied with the traditional pension scheme being operated by FAAN and would rather not succumb to any forceful attempt to return aviation workers to PENCOM.

However, domestic flight operations were not affected by the peaceful protest as passengers were seen embarking on their busy movement.

Solacebase reports that the protest is nationwide as the federal government moves to concession four major airports that include Lagos, Abuja, Kano and Port Harcourt.

Name and shame them please-Bala Ibrahim