The Selection Board for the appointment of a new Vice-Chancellor of Bayero University, Kano has identified and shortlisted four candidates out of the many persons that were either contacted by the Search Team and/or responded to a newspaper advertisement as the eligible candidates for the post.

The tenure of the incumbent Vice-Chancellor, Professor Muhammad Yahuza Bello who was appointed on 17 August 2015 for a five-year non-renewable term is due for expiration on August 17, 2020.

According to BUK Bulletin, already, in line with the guidelines for the appointment of a new Vice-Chancellor, the process had begun since early this year.

It said in a letter conveying the names of the shortlisted candidates signed by the Secretary of the Selection Board and also the Registrar of the University, Hajiya Fatima Binta Mohammed, revealed that three of the candidates were from Bayero University while the fourth one was from King Faisal University, in the Kingdom of Saudi Arabia.

The letter which was addressed to the Chairman of the Standing Committee on Congregation said the shortlisted candidates are; Professor Adamu Idris Tanko; Professor Sagir Adamu Abbas; Professor Dalhatu Balarabe Yahaya from Bayero University, Kano and Professor Mohammed Dikko Aliyu from 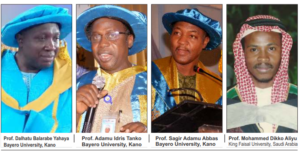 The Registrar, in the letter, said, the Selection Board will have an interactive session with all the shortlisted candidates on Saturday, 8 August 2020.

The Registrar also directed the Standing Committee on Congregation to invite the candidates to meet the University’s Congregation for the traditional parley on Wednesday, 5 August 2020.

Meanwhile, all the candidates have intensified their mobilisation strategies and lobbying of support from members of the University community through holding consultation meetings at both departmental, faculty and centre/school levels with various stakeholders. Interestingly, the campaign trains of the two major contenders of Professor Adamu Idris Tanko and Professor Sagir Adamu Abbas met at the Faculty of Arts and Islamic Studies where they shared banters and pleasantries which is an indication of playing politics of maturity without bitterness a development seen by their supporters as a signed of good omen for the University’s peaceful transition.

Bayero University, Kano BUK has initiated a scheme for on-campus part-time job in which one hundred and twenty five students have been employed in the first instance. Solacebase reports that according to the university, the […]

Bayero University Kano have expelled 33 students for their alleged involvement in various forms of examination malpractice during the first semester examination for the 2017 to 2018 academic session.