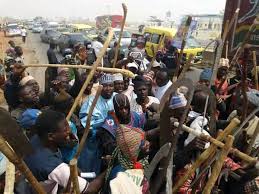 My view on this day International day against drug abuse and illicit trafficking, 26 June 2020. Does the NDLEA, Police and other security agencies do their job to fight drug abuse and thuggery in Kano?

There are a lot of reasons why youths mostly engage themselves in thuggery in northern Nigeria especially Kano state, in that some years back reports revealed that the state was one with the highest number of drug addicts and thugs.

Indeed drug abuse is the root cause of thuggery acts in a society, it contravenes peace and destroys the future of youths.

Drug abuse is also one of the emerging issues of our time threatening peace, security, stability, good citizenship and human development not only in Nigeria but also across the world. Drug abuse does not only rob children, adolescents and adults of their cherished dreams or goals in life but also succeeded in punctuating their lives prematurely, leaving behind bitter memories.

It is credible that Coronavirus pandemic has distracted not only citizens but also government and security agencies from other demanding issues that need good attention from both citizens and government. Due to more attention accorded the deadly disease,  thugs and drug addicts are now a law unto themselves and continuously carry out their barbaric acts in Kano with impunity.

Some weeks ago we were inundated with images and stories trending on conventional and social media on how thugs stormed some areas in Kano metropolis that include Alfidiki, Dandishe, Tukuntawa and other places where they obliterated properties of millions of naira and injured many Innocents people.

While some areas like Dan Agundi, Kofar Nasarawa, Sheka, Warure and Fagge have been converted to illicit drug markets openly.

It is sad that authorities saddle with the responsibility to curtail this menace such as National Drugs Law Enforcement Agency, Police and the Nigerian Security and Civil Defence Corps have all failed in actually bring the perpetrators of this crime to book

Although a year ago, Kano police command was applauded for its wonderful effort to eliminate drug addicts and thugs threatening the life and peaceful co-existence in the state. especially during ex-commissioner of police, Muhammad Wakili popularly known as (Singam) whom stood to ensure that the state descended from its topmost position in the country ladder of drug abusers

The former commissioner is presently in retirement but his sacrifice, dedication, commitment and effort still remain in the mind of the people of Kano.

Likewise, it is now a time for all those in a position of authority to extricate the innocent people of Kano from the acts of thugs and drug addicts because the problem are on the rise.

Additionally, parents have roles to play in educating and training their children to the right path, telling them the benefit of doing the right things and the problem, punishment associated with doing wrong things from childhood.