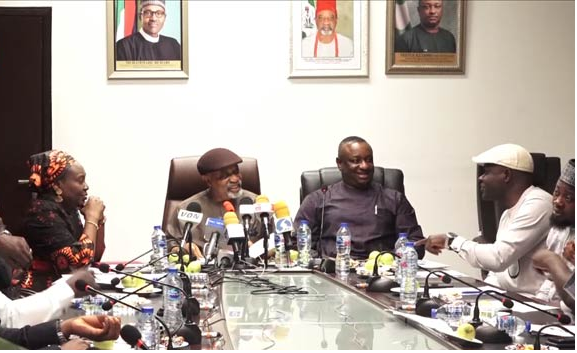 Following three days of delicate negotiations from Government and the Organised Labour on the consequential adjustments of the implementation of the new minimum wage of N30,000, both parties have finally reached an agreement.

The Conciliators to the agreement are Minister of Labour and Employment, Dr Chris Ngige and his state counterpart, Dr Festus Keyamo.

The communiqué reads thus: “Following the threat by Organised Labour not to guarantee industrial peace after Wednesday, October 16, 2019, as a result of the deadlock in the ongoing negotiation on the Consequential Adjustment of emoluments in Federal Government Ministries, Departments and Agencies (MDAs) arising from the New National Minimum Wage of Thirty Thousand Naira (N30, 000.00) as imbued in the National Minimum Wage Act, 2019, the Honourable Minister of Labour and Employment in exercise of his powers under the Trade Dispute Act, CAP T8, Laws of the Federation of Nigeria (LFN) 2004, apprehended the trade dispute and called the parties to conciliation meetings.

“He met each of the Joint National Public Service Negotiating Council (JNPSNC) on Wednesday, 9th October and Monday 15th October 2019. Thereafter, joint meetings were held on 16th, 17th and 18th of October, 2019, after which the following Terms of Settlement and Agreement pertaining to the Minimum Wage Consequential Adjustments in the Public Service were reached.

Confirming the agreement, the Trade Union Congress in a statement, said it was a win-win situation for Nigerian workers and commended the Federal Government and organised labour for their patience while the National Minimum Wage negotiations lasted.

The statement jointly signed by President of the Congress, Mr Quadri Olaleye and Secretary General, Mr Musa-Lawal Ozigi, said it was not an easy journey, applauding government’s team for their wisdom and sincerity.

“We commend the Head of Service of the Federation, Dr Folashade Yemi-Esan and her team for their sincerity.

“Though they argued that government cannot afford to meet our earlier demand of N30,000 minimum wage across board, because of the economic situation in the country, we made them understand that some people cannot be more Nigerian than others, If we are tightening our belts, the government should also do so.”

The Union said as an organisation and a major stakeholder in the Nigerian project, they believe that the parties have done well.

“We shifted grounds and that is why we were able to resolve things without major injuries. It is a win-win situation.”

The TUC boss said he was particularly happy with the agreement because it has addressed some salary discrepancies and overlapping issues that workers have agitated about.

“This is a unique agreement and we promise to build on that by God’s grace,” he added.

Earlier, the Minister of Labour and Employment, Dr Chris Ngige said the new minimum wage was a national law and it must be obeyed by all tiers of government.

“We have often repeated that the essence of that law was for the president to lift the vulnerable working force both in the private and public service.

“This is a national law and it must be obeyed by all; state government, local government and all persons concerned that employ more than 25 persons in their organisation.

“We have decided to fast tract discussions. We are fast tracking it because we need to put an end to the issue of minimum wage till the next five years, when it will arise again.

“We need to finalise this today, The suspense is too much for the people. Even your constituency- workers, if we don’t conclude today, they will be thinking otherwise.

“They will start thinking that you have been compromised, even the government side, if we don’t conclude today, they will start saying you people are influencing us.

“If we do give and take, look at government purse and know that this purse has been badly depleted, make some concession, it will be in the interest of Nigeria.”

NLC President, Mr Ayuba Wabba, had earlier said that the organised labour would continue to be open-minded and would keep up with the principles of collective bargaining.

“We on this side of the table we are ready to ensure that we bring the entire process to a conclusion.

“In the normal practice of Collective Bargaining, you look at issues from both sides, you look at the situation with workers, vis a viz their pockets and what will make the workers happy and very productive.

“If wishes were horses, we would have wished that this entire negotiation was concluded yesterday.” (NAN)

Traders In Gwarzo Protest Plans To Relocate Them