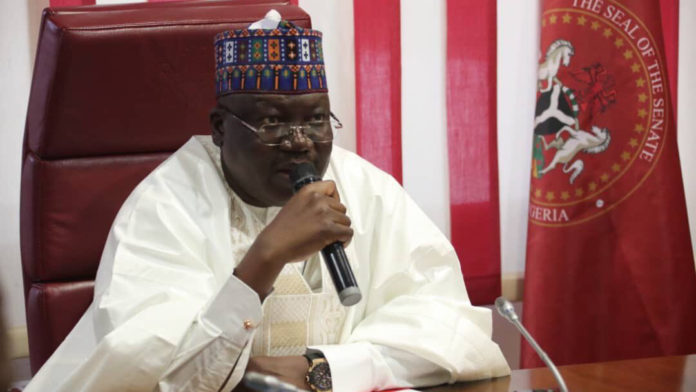 The Senate President, Ahmad Lawan on Thursday night said the Senate was yet to receive the ministerial list from President Muhammadu Buhari.

He spoke with State House correspondents at the end of National Assembly leadership dinner with the President at the Presidential Villa, Abuja.

According to him, ministerial lists are not submitted at dinners.

He also explained that he didn’t promise Nigerians ministerial list this week.

When asked if he was now in possession of the ministerial list, he said “Well, I came for dinner and the process of receiving list is not at dinners. That is all I have to say about this.”

Reminded that he promised Nigerians that the list will get to the Senate this week he said: “I never did. Let me take this opportunity to correct that. A senator raised a point of order under personal explanation and he said we should be sent the list of ministers by the executive arm of government.

“And in my response, I said the executive is working so hard to ensure that the list of Nigerians that will help this Administration work is going to be constituted, we could even receive it this week.

“Could is conditional and I will urge everybody here to report it as it is,” he added.

It was however gathered that President Buhari during the closed doors dinner said he was under tremendous pressure to release the ministerial list.

Buhari was said to have noted that most of the ministers he appointed in his first tenure were not known to him.

And that this time around, he wants to appoint those he knows, have confidence in and that have the capacity to deliver.

Also at the dinner was the Senior Special Assistant to the President on National Assembly matters (Senate), Ita Enang, who initiated the dinner.