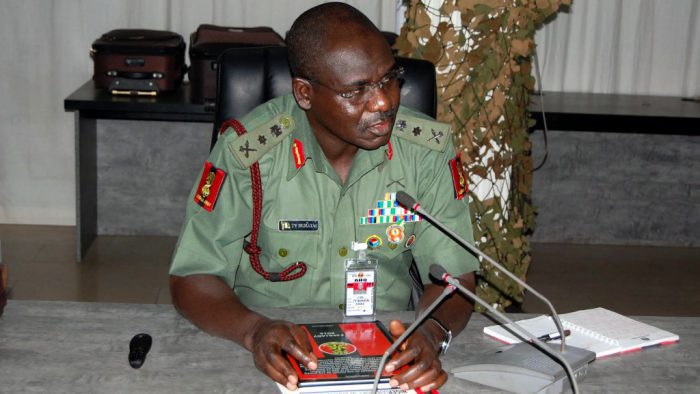 The Chief of Army Staff of Nigeria, Lt. Gen. Tukur Buratai, has responded to the joint Freedom of Information request by Socio-Economic Rights and Accountability Project (SERAP), Enough is Enough (EiE), and BudgIT requesting him to use his “good offices and leadership position to provide information on spending on military operations across the country, particularly in the Northeast.”

This was contained on Sunday in a statement on behalf of the civil society organisation by SERAP’s senior legal adviser, Bamisope Adeyanju.

According to her, “the bulky photographic and textual documentation with a cover letter dated 24 December 2018 was delivered to SERAP’s office last Friday by a military officer at around ”

The letter with reference number AHQDCMA/G4/100/4 and signed on Gen. Buratai’s behalf by Brigadier-General S.B. Kumapayi read in part: “The Nigerian Army (NA) has in recent time come under unrelenting public scrutiny by both private individuals and Non-governmental organisations over issues of appropriation of funds. The most recent being a call from your organisation for the Nigerian Army to explain how funds appropriated for the NA under the administration of the Chief of Army Staff were utilised.”

“In view of the above, I am directed to forward the above-mentioned document to your office for your perusal and retention. Please accept the esteemed regards and assurance of the Chief of Army Staff.”

Bamisope Adeyanju, on behalf of the civil society groups, said: “This is a joint FOI request involving EiE and BudgIT and not just SERAP. Therefore, our groups will carefully study the letter and documentation by Mr Buratai to see if details of the information provided meet the requirements of our request and then promptly respond to him, as appropriate.”

“While we ascertain the level of compliance of the information provided, we welcome Mr Buratai’s demonstrated commitment to the Freedom of Information Act by responding to our request, especially at a time when high-ranking government officials including the Minister of Agriculture and Rural Development, Mr. Audu Ogbeh and Minister of Power, Works and Housing Babatunde Fashola continue to exhibit blatant disregard for FOI requests by refusing to even acknowledge several of such requests.”

“The National Assembly, Nigerian National Petroleum Corporation (NNPC), ministries, agencies and departments should also learn from the good example shown by Mr Buratai by at least honouring and responding to FOI requests from Nigerians, NGOs and others if they are ever to contribute to the efforts to achieve greater level of transparency and accountability in Nigeria.”

SERAP said, “a quick look at the documentation shows a list of several projects reportedly implemented by the Nigerian Army. Among those listed and displayed, which appeared to show certain projects the Nigerian Army said it carried out with budgeted funds, include: places where operations were carried out; renovation of barracks and military hospitals, spending to late soldiers; and workshops; repairs of some old military equipment; and completion of offices and housing projects. Others are feeding of soldiers; of new barracks and schools; acquisition of arms and ammunition and vehicles for military operations; as well as of welfare for soldiers.”

Three CSOs SERAP, EiE and BudgIT had in a joint FOI request asked Mr Buratai to use his good offices and leadership position to “urgently provide information on the 2015, 2016 and 2017 budget implementation reports of the Nigerian Army, including the amounts released (financial implications) and expended in fiscal years 2015, 2016 and 2017 for the various operations the Army carried out.”

The FOI request sent December 2018 and signed by Bamisope Adeyanju of SERAP, Seun Akinyemi of EiE and Atiku Samuel of BudgIT, read in part: “Transparency of the budget process and its implementation is an essential condition to achieve good governance. The reports, if providedand published, will shed light on military spending and put to rest once and for all the perceived lack of transparency and accountability in the spending of military budgets, which has been a subject of intense public debate and concern.”

“If the requested information is not provided within 14 days of the receipt and/or publication of this letter, our organizations shall take all appropriate legal action under the Freedom of Information Act to compel you to comply with our request.”

“Several billions of naira allocated to the military to defend the country and protect its people have neither contributed to improving the ability of Nigerian soldiers to fight Boko Haram and other armed groups nor provided the much-needed security especially for Nigerians in the North-east of the country.”

“By virtue of Section 1(1) of the Freedom of Information Act, 2011, we are entitled as of right to request for or gain access to information, including information on 2015, 2016 and 2017 budget implementation reports of the Nigerian Army, and the amounts released (financial implications) and expended in fiscal years 2015, 2016 and 2017 for the various operations listed, which have yielded no tangible result.”

“Also, by virtue of Section 4(a) of the FOI Act, when a person makes a request for information from a public official, institution or agency, the public official, institution or agency to whom the application is directed is under a binding legal obligation to provide the applicant with the information requested for, except as otherwise provided by the Act, within 7 days after the application is received.”