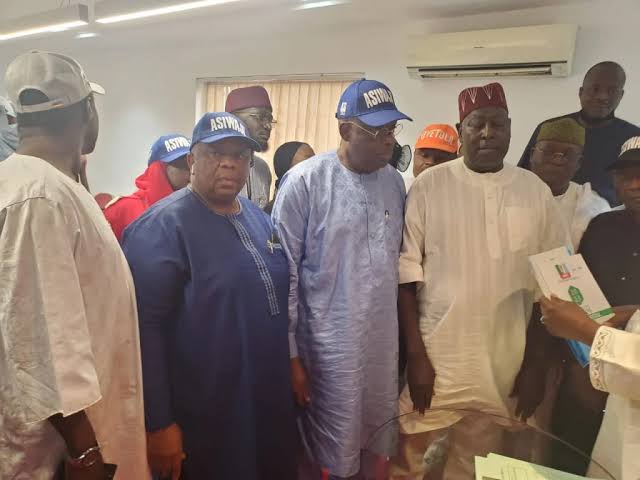 Member, House of Representatives representing Ikeja Federal constituency, James Faleke and a former Secretary to the Government of the Federation SGF, Mr Babachir Lawal on Friday led thousands of members of the Tinubu Support Groups (TSG) to pick a N100 million presidential Expression of Interest and Nomination forms for the national leader of the All Progressives Congress (APC) Asiwaju Bola Ahmed Tinubu.

The TSG which stormed the International Conference Centre ICC to purchase the forms is an umbrella organization for hundreds of groups working to actualize the presidential ambition of Mr Tinubu.

Addressing journalists, Faleke said the former Lagos governor is the only contest at they know.

“We are here as a team on behalf of Asiwaju Bola Ahmed Tinubu to pick the forms that he has personally paid for and because he is out of the country, he paid for his forms directly and asked us to come and pick up the forms. He is the only contestant that we know”, he said.

On the mode of primaries, the federal lawmaker said the Tinubu camp is not jittery as it is prepared for any method that would be adopted by the party.

“It is the party that has the authority to advocate for the mode of primaries. It is not in our purview to do that whatever mode, direct or indirect, we will win the election by the grace of God.

“Asiwaju at the appropriate time will deliver his address to us but I know that this country under Tinubu will be better off, the economy will be better off because he is an economist, he is not a lawyer, he is an economist. He will deal with the economic situation of this country. He did it in Lagos, and the security challenges in Lagos were solved by him, he will solve the same security challenges.

He is a man who rewards loyalty and ensures that people who work are also taken care of. He will ensure that employment opportunities are better off, the issue of strikes will be a thing of the past. Civil service reform was done in Lagos, he will do it again in Nigeria and so on and so forth”, he stated.

On his part, the former SGF, Babachir Lawal said “Senator Bola Tinubu is a branded product”.

“Every Nigerian knows that he is the man to beat and I can assure you that the presidency of Nigeria come 29th May 2023 will go to Tinubu.

“If we were not sure we have chances to win this election, we would not waste our N100 million. Everybody is free to buy the forms if he has N100 million. The choice is his own. He has the money.

But as far as we are concerned, we are only fulfilling the constitutional requirement of campaigning and going for election. We don’t foresee any opposition in the contest. We are not worried in our camp, I am not worried as a person”, said Lawal.

MACBAN hails Soludo over release of abducted herders in Anambra

Prev Next
155 Comments
Leave A Reply